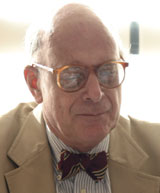 The Board and members of The Hundred Year Association were deeply saddened in June to learn of the passing of Chairman Richard A. Cook after a long illness. Dick served the Association for 36 years, transitioning it into a professionally run organization with ambitious outreach, recognition and awards programs.

During his term Dick expanded the awards program to include corporate sponsorship, ultimately distributing more than $1.3 million to over 850 career New York City employees and college scholarships to their sons and daughters.

Mr. Cook initiated many programs that raised the profile of the Association including in 2002, a three-month long exhibition at the New-York Historical Society called “Family Matters: Century-Old New York City Businesses” which received wide critical acclaim.

Dick was born in Cooperstown, NY and played center on his Amherst College football team. He attained the rank of Senior Vice-President at the East River Savings Bank. In addition to The Hundred Year Association, Mr. Cook was active as a director of The General Society of Mechanics and Tradesmen, Seamen’s Church Institute of New York and New Jersey, Oratorio Society of New York and the Life Savings Benevolent Association of New York.

Remembrances may be sent to The Hundred Year Association in Mr. Cook’s honor.